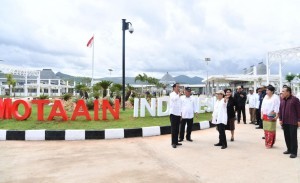 President Joko Jokowi Widodo asserted that the revamp of border posts (PLBN) in a number of Indonesia’s border regions is to do with nationalism and national pride. As the face of the country, the President does not want Indonesia to look bad in the eyes of other countries, particularly its neighboring countries.

Therefore, in addition to improving the quality of the buildings, the Head of State also instructed that quality of service be enhanced. “I ask all leaders and employees in the Immigration, Customs and Excise, quarantine offices, and other officers to really serve the people well. Anyone passing here should be served well, because this is our face, the face of Indonesia,” said President Jokowi when inaugurating the reconstruction of the Motaain PLBN in the Silawan Village, Tasifeto Timur Subdistrict, Belu Regency, and monitoring the Motamasin PLBN in Malaka Regency, East Nusa Tenggara (NTT) Province, Wednesday (28/12) afternoon.

Moreover, the President accompanied by First Lady Ibu Iriana Joko Widodo has once again warned of illegal levies. President Jokowi asserted that he did not want to hear a report of any illegal levies in the public service in Indonesia. “No more illegal levies. Be careful. I request that the speed and improvement of service be enhanced. Not just the building, but their services must also be improved,” the President said.

Development on the Periphery

In addition to inaugurating the Motaain PLBN, President Jokowi and First Lady Ibu Iriana Jokowi during the visit to NTT also monitored the Motamasin PLBN located in Malaka Regency. The President explained that the construction now begins from the periphery, from the village, and we will continue to do so. “We see our border areas have been like this now, in Entikong, Motaain, Motamasin. Our border posts are now better than our neighboring countries,” the President said.

Apart from the better quality of the building, according to the President, the new building of PLBN gives a sense of pride to the community around the PLBN. “People are very proud of their region, their country,” the President said.

Like other PLBNs, the President requested that the Motamasin PLBN also becomes the center of economic activities with the construction of a traditional market. “Traditional market is important for the people for the more velocity of money, and better economic movements. The border plays a vital role,” the President said.