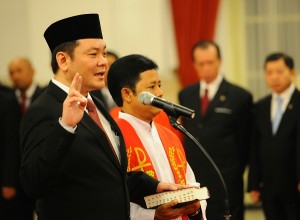 Nazir graduated from Gadjah Mada University, Yogyakarta, in 1995 and has been active in natural resources conversation activities.

In 2014, he was appointed as Head of the Indonesian Program at Climate and Land Use Alliance (CLUA). Previously, he was also appointed as Director of Conservation at WWF for three years. His other experiences include being member of the Indonesian Chamber of Commerce and Deputy Chairman of the Permanent Committee of the Environment and Climate Change from 2011 until 2013.

In the meantime, BRG was established based on the Presidential Regulation Number 1 of 2016 to restore forest and peat land fires that are burned every year in several provinces in Indonesia.

Previously during the announcement of the establishment of BRG at the Merdeka Palace on Wednesday (14/1), President Jokowi said that Nazir would be tasked to coordinate and facilitate efforts to restore peat lands in several provinces, including Riau, Jambi, South Sumatera, West Kalimantan, Central Kalimantan, South Kalimantan, and Papua. The agencys tenure will expire until 31 December 2020.

I consider Nazir Foead as someone with competence and experience in restoring forests and peat lands.  He especially has the ability to coordinate with ministries, institutions and   international organization networks, the President said.

President Jokowi has also assigned BRG to immediately formulate an action plan and implement it as an effort to show the international community that Indonesia is serious in addressing peat land destruction.

In the meantime, Minister of the Environment and Forestry Siti Nurbaya said that BRG is a non-structural agency under and responsible to the President.

The Minister added that the organisational structure of BRG comprises a Head, an Agency Secretariat, and 4 Deputies. In implementing its tasks, BRG is supported by a technical steering team and an expert team. The technical steering team members include provincial governors and relevant deputies and director generals. Meanwhile, the expert team members come from universities, research institutes, professional, and community.