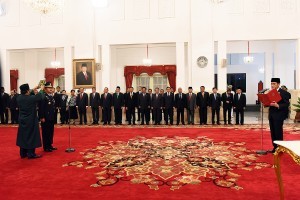 After being inaugurated, in accordance with the Decree of the President of the Republic of Indonesia Number 3/TNI/2017, Hadi is to be promoted to become Marshall.

The inauguration ceremony began with the singing of national anthem Indonesia Raya performed by a group from the Presidential Security Detail (Paspampres).

After the newly appointed Air Force Chief of Staff took an oath, the signing of the minutes of the inauguration ceremony was done directly before President Jokowi. The ceremony ended with the guests attending the ceremony congratulating Hadi.

Hadi Tjahjanto, a 1986 Air Force Academy graduate, was Defense Ministrys Inspector General and Military Secretary of President Jokowi since 2015 until 10 October 2016. Between 2010 until 2011, he was assigned as Commander of Adi Soemarmo Air Force Base in Solo, while in 2015 he was assigned as Commander of the Malang Abdurrahman Saleh Air Force Base in East Java.  He was also appointed as Head of Information Division of the Air Force for the period of 2013-2015.  (FID/ES)  (EP/YM/Naster)