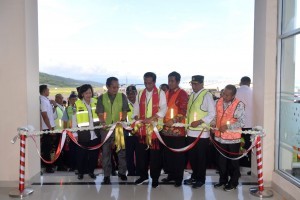 The construction and development of the airport and terminals in Sulawesi is expected to boost connectivity for the people, President Jokowi said.

Particularly for people living in Sulawesi, easy access to transportation is urgently needed to connect them with people outside Sulawesi, the President added.

Indonesia is a large country with nearly 17 thousand islands, so the people need access to interact with each other throughout the country, President Jokowi said.

For the record, the newly completed Morowali Airport is located in Umbele Village, Bumiraya District, Morowali Regency, Central Sulawesi province, occupying an area of 158 hectares. It is equipped with a 1,500 meter runway and 1,000 square meter passenger terminal facilities.

The construction of the new airport will also boost the connectivity of Morowali Regency with several big cities such as Kendari, Palu and Makassar. Before the construction of this airport, the residents had to take land and sea routes to reach other cities. (Presidential Press and Media / ES)