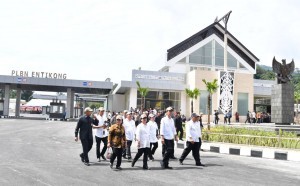 The new border post building was built for more than one year.

President Jokowi, which visited the border post twice  January 2015 and March 2016 -, said that he instructed Minister of Public Works and Public Housing to demolish the old building of the border post and replace it with a better one.

Its all about the pride, about nationalism, about our dignity and self-respect. Across the border I could see the border post of our neighboring country is impressive, while ours is very ugly. At that time, I instructed Minister of Public Works and Public Housing that in one week, it has to be demolished. I also instructed the Minister that in two years, our post has to be better than that of our neighboring country. This is a pride that we want to build (to show) that we are a great nation, the President said.

President Jokowi added that the new border post in Entikong is not the only border post building that is being re-built by the Government. According to the President, there are at least six other border posts that are being re-built by the Government and they are ready to be launched by the end of this year. It turns out that we can make it, cant we? There are seven border posts that we have built. As long as we have a will, well make it. Theres nothing we cannot build, the President said.

Later on, once a big market is available, there will be economic activities. I think this is the benefit that we can get from the presence of a border post in Entikong as (one of) our outermost regions, the President said.

On that occasion, President Jokowi also reminded his administration to improve the quality of immigration services, customs services, and other services in line with the improvement of the border post.

Although Entikong is far from the capital, bear in mind that we now have the Saber Pungli (illegal levies eradication task force). Be careful. Weve arrested many. We dont want more people arrested here. Once Ive spoken, be careful. It means I will keep an eye on it, the President said.

President Jokowi also hopes that the new building of the border posts will also prevent smuggling, including the drugs smuggling from neighboring countries.

With the new border post, we hope we can eliminate smuggling, including drug smuggling, the President said responding the reporters questions.

President Jokowi also said that he is satisfied with the new border post building. However, he stressed that the development of border areas does not stop here and the Government will continue building other supporting infrastructures such as roads so that the border areas can be better and better.

Clearly, its getting better. However, there are still many that have not been finished (such as roads and others). Those are what were going to finish in two years, President Jokowi said.