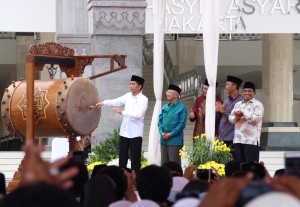 KH Hasyim Asy’ari Grand Mosque located on Daan Mogot Street, West Jakarta, which was inaugurated on Saturday (15/4), is a symbol of friendly and moderate Islam as well as becomes a pillar of diversity for both Indonesia in general and Jakarta in particular, according to President Joko Jokowi Widodo.

KH Hasyim Asy’ari Grand Mosque is a proof of commitments of the Central Government and the Jakarta Provincial Government in appreciating the rights of Muslims to perform their religious services, as the main pillar of this country. The Government also gives its full support to the rights of citizens to embrace a religion and perform their religious services, President Jokowi said in his remarks during the inauguration of the Mosque on Saturday (15/4).

The President added that during his administration as the Governor of Jakarta back in 2014, he was the one who laid a cornerstone in the construction of the Grand Mosque. Previously, there was no Grand Mosque in Jakarta. After the ceremony of laying the cornerstone, the construction carried on and was completed by Jakarta’s Governor Basuki Tjahaja Purnama. And now, the Mosque is 100 percent done.

I am happy that this Mosque is mostly decorated with Betawi-style ornaments because we asked that each pillar to bear the gigi balang pattern (traditional Betawi pattern). There are also Betawi-style balustrades which are influenced by rumah bapang (traditional Betawi House). Thus, nearly all peculiarities of Betawi characteristics appear at Hasyim Asyari Grand Mosque in Jakarta, the President added.

The Mosque, which is built on a 2.4-hectare plot of land and 1.7 hectare of surface area, can accommodate 12,500 people. The two-story Mosque which has five towers is also equipped with multipurpose rooms, mezzanines, classrooms, social rooms, a warehouse, and a room for Small and Medium Enterprises (SMEs).

President Jokowi also conveyed his gratitude and congratulation to the Central Government and the Jakarta Provincial Government for completing the construction of the Grand Mosque which is a proof of cooperation between the two governments and is supported by the Regional House of Representatives (DPRD). All sides gave their tremendous support so the construction can be finished within three years. This is a proof that the Central Government and Regional Government are committed not only to improving the economy of the people but also to guaranteeing a vibrant and blessed religious life, the President stated.