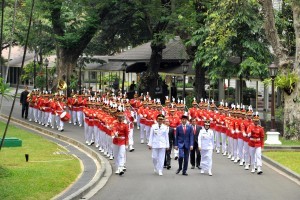 The inauguration of West Nusa Tenggara Governor and Deputy Governor for 2018-2023 term began with the submission of a Presidential Decree to the pair, at the Merdeka Palace.

The inauguration ceremony began by the singing of national anthem Indonesia Raya and was followed by the reading of Presidential Decree Number 155/P of 2018 on the Endorsement and Appointment of Governor and Deputy Governor of West Nusa Tenggara for 2018-2023 term by Deputy Minister to Minister of State Secretary for Apparatus Administration.

Afterwards, the pair took an oath before a religious figure led by President Jokowi.

I do solemnly swear by Allah to fulfill my duties as Governor, Deputy Governor to the best of my capabilities and in the fairest way possible, to uphold the 1945 Constitution of the Republic of Indonesia by all means, and to execute all laws and regulations as straightforwardly as possible, as well as to dedicate myself to the service of the Nation and the People,” the oath taken by Zulkieflimansyah and Sitti Rohmi Djalilah reads.

The ceremony was then followed by the signing of the inauguration ceremony minutes, pinning of a rank insignia, and congratulatory messages conveyed by the President and invited guests.