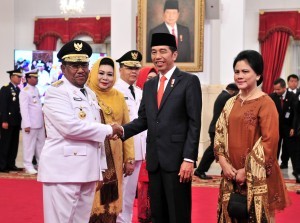 President Joko Jokowi Widodo, on Monday (10/12) at the State Palace, officially inaugurated Wan Thamrin Hasyim as Governor of Riau for rest of 2014-2019 term and Rohidin Mersyah as Governor of Bengkulu for rest of 2016-2021 term, at the State Palace, Jakarta, on Monday (10/12). The two newly-inaugurated governors previously served as acting governors in their respective provinces.

After the ceremony, Governor of Bengkulu Rohidin Mersyah and Governor of Riau Wan Hasyim affirmed that they will carry on the programs initiated by the former governors.

Personally, I will carry on the programs that was set by former governor Ridwan Mukti and me 2.5 years ago. It covers strategic infrastructures development, management of natural resources in Bengkulu particularly for export purposes, and development of tourism sector through national and international events, Rohidin Mersyah told reporters.

The Governor admitted that President Jokowi instructed him to perform well, always refer every programs to regulations and laws, so that the regional government can be productive.

Regarding corruption eradication efforts, Rohidin, who replaced former governor Ridwan Mukti who is named suspects in bribery case, said that his government will cooperate with Corruption Eradication Commission (KPK) to establish a team that will produce seeding of integrity.

Moreover, Rohidin added, the regional government of Bengkulu will develop e-government system on permit sector, and public services including for employee career path.

With that innovation, we try to reduce direct contact with people therefore, itis expected the opportunities for corruption, collusion, and nepotism can be eliminated, Rohidin stated.

According to Rohidin, the regional governor of Bengkulu has launched a program to connect e-budgeting and e-planning in 9 regencies/cities simultaneously. Employee management, promotions, pensions, and career path are also based on website.

We also have been implementing online single submission (OSS) system for permit since 6 months ago that is expected to improve the sector and provide transparency in the management of permits, the Governor added.

On the same occasion, Governor of Riau Wan Hasyim said that he will continue programs that have been implementing in Riau by the previous governor since he will serve as governor for 2.5 months only.

Programs that have been implementing in Riau will be carried on, including the construction of Pekanbaru- Dumai toll road. That is our concern for now, we hope the road can be completed immediately because the infrastructure are really needed by people in Riau, he added.

Wan Hasyim explained that there will be no major change because he still has the same authority and responsibility both as governor and acting governor.