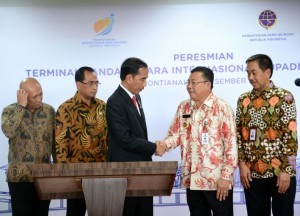 Following the inauguration of the terminal, President Jokowi hopes the best services can be given to passengers, whose number continues to rise.

I was informed that the growth of passengers at the Airport is 15 percent. So if the Airport currently accommodates 3.5 million passengers, next year it will no longer be able to accommodate the number, the President said.

The terminal occupies an area of 32,000 square meters, which means that we want to meet the 15 percent growth target, the size has to be doubled, or around 64,000 square meters. But well see. I want to know whether the Airport cannot handle the growth of passengers, the President said.

In terms of design, the new terminal of the Airport mainly adopts Dayak ornaments and the Airport itself also has a runway measuring 2.250 meters x 45 meters.

We are planning to build not only one runway but later on we will build two runways. We will decide later. If traffic at the Airport has been so congested, like it or not, we have to build another runway, the President concluded.