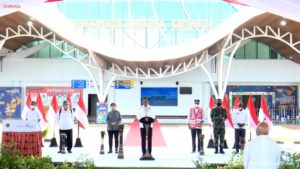 “Today, the construction of new passenger terminal covering an area of ​​7,200 square meters has been completed. It has a capacity of 638,000 passengers per year. This is huge,” President Jokowi said in his remarks.

The President expressed hope that the new terminal can improve the quality of services to passengers at the Mopah Airport.

The airport, which is located at the eastern tip of Indonesia, continues to be developed to further improve the connectivity in Merauke by air. The President said that the airport terminal capacity will also continue to be increased to anticipate the increase in the number of passengers as well as the increase in community mobility and economic activity in the future.

“I would like to say to the Governor and especially to Regent of Merauke to make the best use of this airport and encourage the birth of new economic centers in Merauke regency and its surroundings, as well as to increase regional competitiveness in exports and investment. This is so that the airport can really be beneficial and improve the welfare of the people of Merauke and generally the progress of the Land of Papua,” he said.

On the occasion, the President underlined that as an archipelagic country that spans a vast distance, infrastructure is essential for Indonesia. For this reason, the Government continues to actively build various infrastructures throughout Indonesia, including transportation infrastructure.

“Since the last seven years, we have continued to build and develop airports, build ports to facilitate sea toll connectivity, and build roads throughout the country,” he said.

He also stated that infrastructure development is vital to improving inter-island connectivity, which will not only facilitate mobility but also unite the Indonesian people.

Meanwhile, Minister of Transportation Budi K. Sumadi, in his report, stated that the Ministry had carried out the first of the three stages of the planned Mopah Airport development. Currently, the Mopah Airport can accommodate Boeing 737 and Airbus 320 aircraft.

The Minister added that the Mopah Airport plays a very important role in the distribution of logistics for the 20th National Sports Week (PON) in which Merauke regency is one of the hosts.