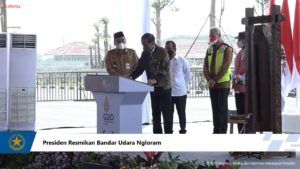 “Thank God, this morning we can see that [the construction of]  Ngloram Airport, which is located in Cepu district, Blora regency, Central Java province,  has been completed and is ready to be used by the community,” President Jokowi stated.

Built on an area of ​​approximately 27 hectares, the airport has a runway of 1,500 x 30 meters and can serve ATR 72 type aircraft.

“Earlier, Minister of Transportation said that there were already two flights a week and they were always full. We hope that later if the flight is continuously full and the runway of 1,500 (meters) is not enough, we will extend it to 2,000 meters,” the President said.

According to the President, the Ngloram Airport is expected to boost economic activities in the regency and its surroundings, namely the regencies of Bojonegoro, Tuban, Ngawi, as well as parts of Purwodadi regency, and Rembang regency. It is also more efficient for people from these regencies to fly from this airport, he said.

“We hope that economic activities will improve, more investment will enter Cepu, Bojonegoro, and distribution of goods from region to region, from province to province will also increase and improve. We will be able to increase the mobility of people between provinces, between islands, between cities, between regencies,” he said.

The President also explained that the airport, with its large terminal, can accommodate approximately 210,000 passengers per year. He also considered the airport to have a good design.

“It is designed like we are under teak forests, because Blora is very famous for its teak forests. This is also very good. We hope that this airport can really benefit the people in Blora regency and its surroundings,” he remarked. (TGH/AIT/ST)(FI/MUR)