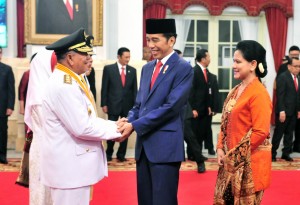 President Joko Jokowi Widodo, on Friday (10/5) at the State Palace, inaugurated Abdul Gani Kasuba and Al Yasin Ali as Governor and Deputy Governor of the North Maluku Province for the term of 2019-2024.

Also present during the event were, among others, Minister of Home Affairs Tjahjo Kumolo, Minister of State Secretary Pratikno, Cabinet Secretary Pramono Anung, Chief Justice of the Constitutional Court Anwar Usman, and Member of the Presidential Advisory Board Agum Gumelar.

After the inauguration, the newly-appointed Governor Abdul Gani Kasuba said that President Jokowi asked him to serve and empower the people of North Maluku, to continue what has been done by his predecessors, and to ease business licensing process.

Abdul Gani also said that he has proposed the construction of a 100-km toll road between the Capital City of North Maluku Province and Koabangkao Airport to reduce the travel time to 45 minutes.

He went on to say that North Maluku Provincial Government will continue road construction in Halmahera areas to connect six regencies/municipalities.

“I hope that in this period the Deputy Governor and I can continue the (infrastructure) projects as well as other priority programs on education, universities, and human resources,” the Governor said, adding that he will also develop tourism in the Province.