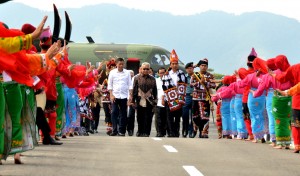 The CN-295 plane that carried the President landed at the Airport at around 9.50 a.m. local time.

In the meantime, President Jokowi in his remarks at the inauguration ceremony said that the construction of the Airport must be followed by measures to promote tourist destinations in Gayo highlands and its surrounding area.

Regent of Bener Meriah and Regent of Aceh Tengah must be able to promote Lake Laut Tawar that is surrounded by beautiful mountains, said President Jokowi, who once lived in Aceh province.

The President added that tourism promotions must also be carried out through collaboration with related sides such as Ministry of Tourism and other provincial governments.

The nearest province is North Sumatera Province, so tourism promotion can also be done in the Province, the President said.

President Jokowi went on to say that the Airport does not only serve tourists but also connects Bener Meriah Regency and Aceh Tengah Regency with other islands and provinces in Indonesia.

He added that the Airport is also expected to strengthen the economy in the areas.

Connectivity unites us from Sabang to Merauke, from one province to other provinces, from one regency to other regencies, from one city to other cities in Indonesia, President Jokowi said.

The connectivity is not only about transportation but also connects people with their relatives even closer, the President added.

On that occasion, President Jokowi also underlined that development must begin not from Java but from other areas in Indonesia and it must lead to the central (Java) by connecting all places in Indonesia

Also accompanying the President at the inauguration ceremony were Cabinet Secretary Pramono Anung, Minister of Public Works and Public Housing Basuki Hadimuljono, mayors and regents in Aceh Province as well as Head of the Meteorology, Climatology, and Geophysics Agency (BMKG) (UN/SLN) (EP/YM/Naster)