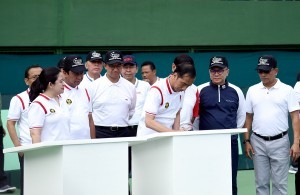 “This morning, by saying bismillahirrahmanirrahim, I hereby inaugurate the renovated Indoor and Outdoor Tennis Courts,” the President said, adding that as the renovations of venues for the upcoming 2018 Asian Games are gradually completed, Indonesia is more ready to host the Games.

After the inauguration, President Jokowi signed an inauguration inscription of the GBK Indoor and Outdoor Tennis Courts and received a racket from representatives of several national tennis players.

For the record, the courts will be two of the venues to be used for the Games. The renovation was done for 16 months by PT Brantas Abipraya.

After the inauguration, the Outdoor Tennis Court is used for Davis Cup Group II Asia/Oceania match between Indonesia and the Philippines.

The President went on to say 7 out of 14 venues for the Games have been inaugurated. Previously, President Jokowi has also inaugurated Istora Senayan for badminton, GBK Main Stadium, Hockey Court, Archery Field, ABC Football Field, and Swimming/Aquatic Stadium.