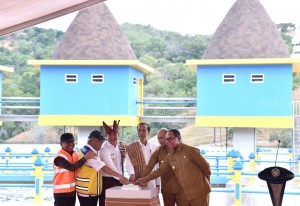 According to the President, water is the key to achieving prosperity in the province and that the Government is set to build seven dams there, namely Raknamo, Rotiklot, Napun Gete, Temef, Manikin, Mbay, and Welekis.

“Raknamo Dam (project) is completed. Now, water in Rotiklot dam has gone up. The quality of water is good. There will be another one like Napun Gete. There will be more dams, seven in total,” the President said on Monday (20/5).

When water is available, the President added, the people could plant a variety of commodities such as rice, corn, shallots, papayas, bananas, watermelons, or melons in the dry season. Farmers also can harvest more than once a year, he said.

“The next step, with the water availability, we can decide what needs to be planted. Step by step, we have to find a way out to achieve prosperity together,” President Jokowi said.

“We hope the Minister of Public Works can also finish the other dams, soon. The demands for more dams are still under discussion and calculation,” the President added.

For the record, the Rotiklot Dam is one of 49 new dams built by the Government in the 2015-2019 period and is expected to irrigate 139 hectares of land and can also be used for hydroelectric power plants, tourist attractions, as well as household water for all residents in Belu district.

The dam has been constructed since the end of 2015, funded by the state budget of 2015-2018 with a construction contract value of Rp497 billion.

“Each of the dams needs Rp497 billion funding. The construction of those seven dams needs a spectacular budget. But this is very much needed by the people in East Nusa Tenggara. This (move) will be very beneficial in the long run,” he said. (BPMI/EN/ES)