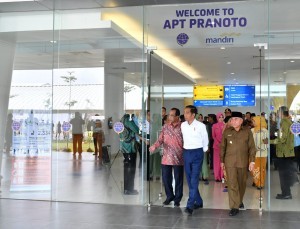 The construction of the Aji Pangeran Tumenggung (APT) Pranoto Airport in Samarinda city, East Kalimantan that initiated by the provincial government was praised by President Joko Jokowi Widodo and he promised to make this as an example for other regions.

I really appreciate the provincial governments initiative to construct the APT Pranoto Airport. The Central Government only gives a small amount of budget. I will set this as an example to other provinces so that they will follow what East Kalimantan province has been done, President Jokowi said when inaugurating the APT Pranoto Airport in Samarinda, East Kalimantan, Thursday (25/10).

According to the President, the airport has a great potential to support East Kalimantan’s economy. Moreover, people and goods mobility from and to the airport is expected to further increase in the future.

Therefore, President Jokowi instructed Minister of Transportation to continue monitoring the density of the airport. If needed, the President requests to expand the terminal three times larger than its current capacity. The current size of the terminal is 12 thousand square meters, he added.

In addition, the President also directly instructed Minister of Transportation to immediately prepare flights from the airport to Jakarta or Surabaya to meet the needs of the people of Samarinda.

Initially, Minister of Transportation has been optimistic that the Presidents orders can be executed in the next one to two months. However, President Jokowi considered the time offered is too long so he asked to accelerate it within the next two weeks.

Feel free to choose the airlines to be used, whether its Garuda (state-owned airline company) or not, the President said.

On the same occasion, President Jokowi also inaugurated Maratua Airport which located at Berau Regency in Maratua Island, East Kalimantan. The airport, which is located at one of the outermost islands in Indonesia, was built to serve transportation needs of the surrounding residents as well as to develop tourism on the island.

It aims at developing tourism sector. It can be a new economic growth point, the President said, adding that the airport is fully funded by the State Budget.

The construction of Maratua Airport was also initiated by the regional government of Berau Regency and the provincial government of East Kalimantan in 2008. The construction was then continued by Directorate General of Civil Aviation of Ministry of Transportation and completed in 2017. Currently, Maratua Airport has been operating several airlines since the end of 2017.