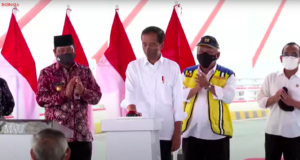 “Thank God, the Sei Alalak Bridge has been completed and today we inaugurate it so that it can be utilized by the community,” the President said.

The Sei Alalak Bridge connects Banjarmasin city with Barito Kuala regency heading to Central Kalimantan province. This area is notorious for its traffic jams, especially after the North Ring Road was badly damaged after the flood.

“I heard that the community is impatiently waiting for the inauguration of this bridge because this bridge has a very important function as the main access route connecting Banjarmasin city with various areas in South Kalimantan and Central Kalimantan provinces,” said the President.

President Jokowi revealed that the earthquake-resistant bridge, which was built with a fund of Rp278 billion, uses high technology and is estimated to last up to 100 years.

“After the inauguration, I hope the bridge will be utilized as well as possible to generate and advance productive activities in the community so that the impact can really be felt by our people,” he said.

Following his remarks, the President pressed the siren button to mark the inauguration of the bridge. (TGH/UN-PR of Cabinet Secretariat) (FI/MMB)