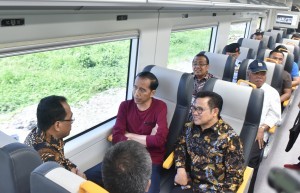 President Jokowi tries the newly launched airport train, after the inauguration at the Soekarno-Hatta Airport Station Tangerang, Banten on Tuesday (2/1)

By saying Bismillahirrahmanirrahim, I officially inaugurate the operation of Soekarno-Hatta Airport train this morning, President Jokowi said as he pressed the siren button and signed the plaque to mark the inauguration of the train.

In his statement, the President said he is grateful that after three years of working hard, the project is finished and hopes that the train can reduce traffic congestion on way to Soekarno-Hatta Airport.

In the future, once the airport train is already integrated with Mass Rapid Transit (MRT), Light Rail Transit (LRT), Transjakarta, and high-speed train, we hope that the people will not drive private cars but use mass transportation instead – a public transportation that is is safe and comfortable – either in the Greater Jakarta or when heading to the airport, President Jokowi added.

Mass public transportation is needed in the Greater Jakarta because traffic congestion has caused an annual loss of Rp 67 trillion, the President said.

Commenting on the train, the President said that it is nice, comfortable and arrives on time.

For the record, the trip from Soekarno-Hatta to Sudirman Baru Station takes about 55 minutes and costs Rp 70,000 for one way.

According to the President, the ticket price is still under calculation but he hopes the price will be fixed.

It is still under calculation because our aims are not only at developing airport train but also discouraging people from using private cars and turning to mass transportation. The Jakarta regional government may possibly provide subsidies for this. Why not? the President stated.

President Jokowi also reminded the people to start using non-cash transaction when ordering the train, be it paying with credit card or e-money.

Even though counters to buy prepaid ticket are still available, we hope all people will use non-cash in the future, the President added.  (FID/JAY/ES) (RAS/EP/YM/Naster)