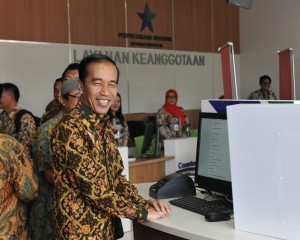 The library compound, which is built on a 11,975 square meters plot of land and 50,917 square meters of surface area with a height of 126.3 meters, 24 floors, and three basements, is said to be the tallest national library building in the world. This is a manifestation to prepare for the future. In fact, the construction of the building was initiated by (first president) President Soekarno 65 years ago, but it just has been finished. The construction took 2.5 years to be finished and it was finished with a very good condition, President Jokowi said in his remarks.

The President hopes that the library can increase children’s reading interest, be it the Generation Y and Z who have very different way of thinking and demeanor than the previous generations.

President Jokowi went on to say that the current generation prefers to read articles and news in their smartphones or tablets and only few of them still read the printed newspaper. According to the President, it is because people can now watch any news, live streaming in one click and they can read any news in real time, or they can also watch videos on Netflix.

The reading durability is getting shorter and if they find an article is not interesting in the first three minutes reading, they will not continue, the President said. That is the pattern, the President added.

President Jokowi further said that now is the age of digital breakthroughs and everything is developed in an unexpected way with many innovations being introduced rapidly and if Indonesia does not changed and do digital revolution, the country will be left behind. I am delighted that the National Library has made digital developments and converted everything into digital forms. I was informed that there are e-resources, e-books, e-journal and other digital forms, President Jokowi stated.

However, the President said he would test the facilities later on to ensure that everything is in digital form and he would assign somebody to test the new services in the National Library. It must be tested to know whether the facilities have made the book borrowing and returning processes easier or not, whether the digital collection can be accessed from smartphone, President Jokowi said adding that such services are really important (to be implemented). I will check and test it in my own way, President Jokowi concluded.