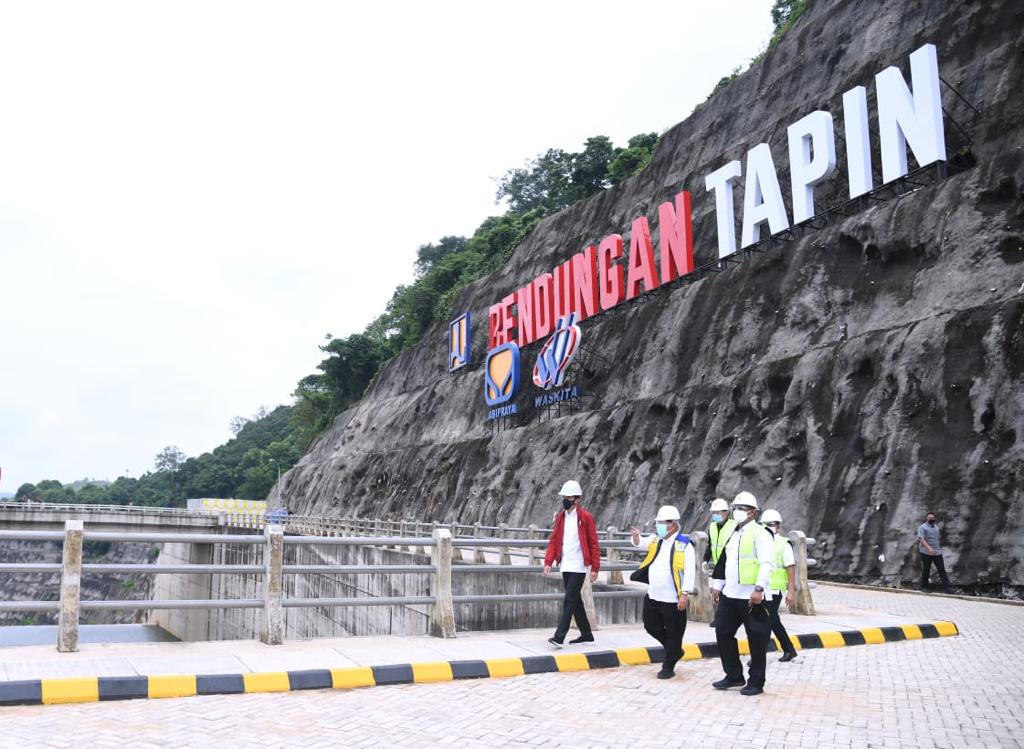 “By saying bismillahirrahmanirrahim, today I hereby inaugurate Tapin Dam in Tapin regency in South Kalimantan province,” said the President, followed with the sound of sirens and signing of inscription as a token of inauguration.

Tapin dam was constructed from 2015 to 2020 with a total budget of Rp986 billion. The dam functions to boost food security through irrigation, reducing floods, and providing raw water and is also a source of water for hydroelectric power plants.

“Tapin Dam has a capacity of 56.7 million meter cubic and plays an essential role in flood control. It is also expected to boost food security as it can provide irrigation for 5,472 hectares as well as raw water of 0.50 meter cubic per second. And it also generates 3.3 megawatts of electricity,” the President stated.

According to the President, due to the operation of the dam, Tapin regency was one of the areas least affected by the floods that hit South Kalimantan a while ago.

“The (interim) Governor (of South Kalimantan) also said that because of Tapin Dam, floods in Tapin regency reduced drastically. Very small areas were hit by floods since Tapin regency has this dam,” the President said.

Furthermore, the President pointed out that although the dam contributes to flood reduction, it must be accompanied with a comprehensive management from the upstream to the downstream.

“Reforestation, mass replanting in fields, especially those connected to a watershed, need to be carried out immediately if we do not want to be hit by floods in the future,” he said, adding that Tapin Dam and Watershed can also be a tourist destination in South Kalimantan province.

“The beauty around this dam can be a tourist attraction, not only in Tapin regency, but also in South Kalimantan province,” he said.

Ministry of Public Works and Housing reported that the impounding process or initial filling of Tapin dam has begun since October last year.

In the meantime, interim Governor of South Kalimantan Safrizal expressed hope that the people of Tapin can make the most of this dam, not only for flood control, but also for power plant energy source and irrigation for rice fields around the downstream.

“With this dam, God willing, agriculture sector can improve and even provide food supply for the future capital city in East Kalimantan province,” he remarked. (FID/UN) (DH/EP)