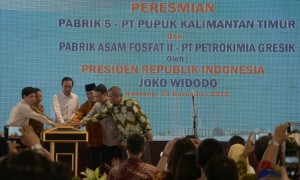 Jokowi President accompanied by Minister of SOEs and the officials inaugurated the factory 5 of PT. Kaltim Pupuk, in Bontang, East Kalimantan, on Thursday (19/11) (Photo: PR/Deni)

On the second day of his working visit to East Kalimantan, President Joko Widodo (Jokowi) accompanied by First Lady Iriana Joko Widodo, inaugurated the factory V of PT. East Kalimantan Pupuk in the Field Pupuk Headquarters of PT Kaltim Bontang, Thursday (19/11). The factory which is under Indonesian Pupuk Holding Company has a capacity of 825 thousand tons of ammonia and 1 million tons of urea.

The existence of the fertilizer factory, according to President Jokowi, has a very important role in achieving food self-sufficiency and independence. “This confidence should be supported by a sufficient supply of fertilizer,” he said.

The President delivered; with the establishment of a phosphoric acid plant is expected to ensure the supply of NPK raw materials for agricultural needs in Indonesia.
“It was presented by Managing Director of PT Pupuk Kaltim, could save the cost of NPK raw materials up to 20 million dollars per year,” said President Jokowi.

In his speech, the President also said that the need of urea and phosphate fertilizers, which last year reached 6.7 million tons to 400 tons for urea and phosphate, would continue to increase in line with the expansion and extension of the food land.

“In addition we are could meet our own food needs, I believe in 3-4 years we will could to export food items to the outside,” added the President.