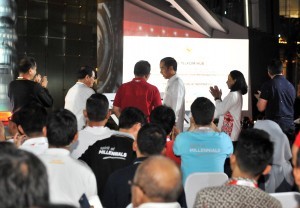 President Joko Jokowi Widodo inaugurated the opening of The Telkom Hub area at Gatot Subroto road, Jakarta, on Thursday (11/1). In a bid to make Indonesia a supportive country for innovation, President Jokowi, in his opening remarks, welcomed the development and revamp of the Telkom  Group (state-owned telecommunications company) office area, which is named The Telkom Hub.

The Telkom Group builds The Telkom Hub as a center for the growth of digital innovation culture covering service management and smart infrastructure, digital entrepreneurship development, social education and technology, as well as digital user service. There is also a smart mosque in the area.

With this inauguration, the Telkoms hard work is just begun, President Jokowi said, adding that big and smart ideas must be followed by proper execution, commitment and hard work. This applies to Telkom and other state-owned enterprises, the President said.