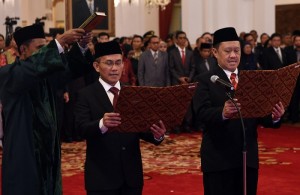 President Joko Jokowi Widodo on Friday (12/2) afternoon, at the State Palace, Jakarta, inaugurated two Judicial Commission (KY) members for 2015-2020 period along with the inauguration of the Chief and members of Indonesian Ombudsman (ORI).

Here are the members of Judicial Commission (KY) who took oath before President Jokowi:

Inauguration procession began by reverberating the national anthem Indonesia Raya (Great Indonesia). After that, it was followed with the reading of Presidential Decree by the Deputy Minister of State Secretary for Apparatus Administration, Cecep Sutiawan.

Then, they took oath before President Jokowi. The inauguration procession was followed by the signing of minutes of inaguration ceremony.

According to the Law Number 18 of 2011 on the Amendment of the Law Number 22 of 2004 on Judicial Commission, its members are appointed by the President with approval from the House of Representatives (DPR).

The two KY members who were inaugurated by President Jokowi were chosen by a selection committee based on various tests, such as tests of quality, personality, and health, investigation results, as well as final interview. (DID/EN/OJI/ES(RAS/MMB/YM/Naster)