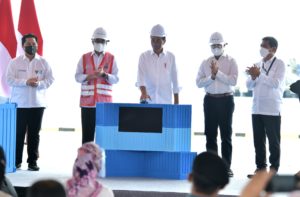 “I really appreciated the swift work, the construction was started in August 2020 and today we can inaugurate it,” the President said in his remarks.

He went on to say that construction of Wae Kelambu Multipurpose Terminal aims at dividing logistics terminal and passenger terminal as an effort to support the development of Labuan Bajo as a premium tourist destination.

According to the President, the old terminal will only serve to transport passengers since it is located in tourist destination spot, whereas logistics terminal will be relocated to the newly-inaugurated Wae Kelambu Multipurpose Terminal.

The President also expressed hope that the Multipurpose Terminal can improve smooth flow of goods transported to and from East Nusa Tenggara, particularly West Manggarai regency.

“I hope the terminal can still be in operation for 15-20 more years to transport logistics from East Nusa Tenggara province, particularly West Manggarai regency,” he said.