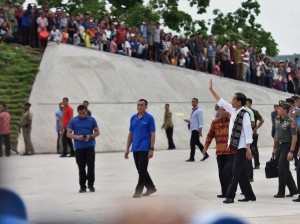 The President recounted when he first checked the Motaain PLBN in Belu Regency three years ago, it was a very simple office. “Compared to those in Timor Leste, we were losing,” the President said. Not surprisingly, at that moment as Belu Regent said, the NTT people often went to Timor Lestes Cross-Border Post only to take a selfie.

However, as the PLBN has been built in Motaain, according to the President, things have changed now. “The people of Timor Leste take a selfie in our Post now,” the President said.

According to the President, the PLBN is not only built in NTT, but also in Entikong, Aruk, and Nanga Badau in West Kalimantan as well as in Skouw, Papua, which are the vanguard of Indonesia. “Now, our Posts are twice as better as Timor Lestes,” the President said.

President Jokowi entrusted to the Governors, Regents, Mayors, and also the people who live around the PLBNs to come together to safeguard and preserve the Posts.

In addition, the President requested that potential trade and economic activities in the border regions of Indonesia be identified. “I’m sure there is a lot of potential in NTT that our neighboring country needs, and we have to respond to it, we must seize these opportunities so that our exports will rise,” the President concluded.