President Jokowi: Indonesia Aims to be the Biggest Digital Economy in ASEAN 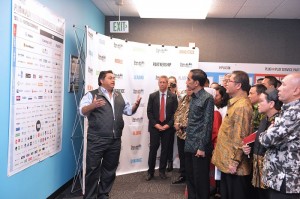 President Joko Jokowi Widodo in his visit to Silicon Valley on Wednesday (17/2) also had a meeting with Saeed Amidi, CEO Plug and Play, a global innovation platform that connect startups to corporations in the fields of information technology and communication.

I hope Plug and Play can work with Indonesia in our efforts to become the biggest digital economy in South East Asia that is projected to reach US$ 130 billion in 2020, the President said at the meeting.

The President added that Indonesia can learn from the concept of tech incubator and accelerator from the Silicon Valley model to accelerate digital economy in Indonesia, especially for startups.

The President added that medium and long term action plans that the Indonesian Government has made to realize the goal are, among others, by providing financing access for micro, small, and medium enterprises and new IT companies.

The facilities are in the form of Smallholder Business Credit (KUR) and the market liquidity policies for startup companies, in addition to special policies that give incentives and facilities in financing for new IT companies.

President Jokowi also hopes to see concrete steps and follow-up projects in Indonesia so the countrys vision to become the biggest digital economy in South East Asia can be immediately realized.

Before leaving the office of Plug and Play, the President and his entourage toured around the office.

In addition, the President also wrote Start it up together, prosper together on Plug and Plays office wall, on which his photo is displayed. (TKP/AS/ES/EN) (EP/YM/Naster)