President Jokowi: Indonesia Has to Move Faster in 2016 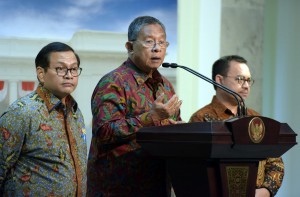 President Joko Jokowi Widodo asserted in 2015, Indonesia has built a great and strong foundation. In politics budget, fuel subsidy was allocated to other programs that bring benefit to the people. Indonesia also has accelerated infrastructure development and changed the course from creating a Java-centris country to Indonesia-centris.

With the foundation, the President wants Indonesia to move faster in 2016 as well as work harder because the challenge in 2016 is as hard as in 2015.

However, the President asserted that the current condition is very good.

We have trust. Many investors are queuing to enter Indonesia, and a stable dollar exchange rate towards rupiah. We only have to change those opportunities into our goals, President Jokowi said when delivering a remark on a Plenary Cabinet Meeting at the Presidential Office, Jakarta, on Wednesday (23/12) afternoon.

The President appreciated several ministries/institutions which carried out pre Budget Implementation Entry List (DIPA) auction, for example Ministry of Public Works and Public Housing which auctioned as many as 42 percent, Ministry of Energy and Mineral Resources (ESDM) with 34 percent, and Ministry of Transportation with 31 percent.

President Jokowi asked the ministers particularly who received a huge amount of the State Budget (APBN) allocation to accelerate the budget realization at the beginning of 2016 to maintain the momentum of economic growth which lately need to be pushed, so that Indonesia can boost  the targetted economic growth of 5.3 percent in 2016.

I also told the governors, regents and mayors to allocate as many as 37 percent from the State Budget allocating for Regional Governments to be materialized soon. I also asked Minister of Finance to give data regarding the amount of State Budget that is kept in regional banks and to allocate the programs to labor intensive program, President Jokowi said.

On that occasion, President Jokowi reminded the ministers and the heads of institutions to focus on 5 crucial indicators, namely economic growth, inflation control, poverty management, labor absorption and to fix the issue of unemployment, and the issue of economic gap as well.

The implementation of those five indicators must be monitored and observed everyday, every month, the President firmly said.

Regarding the ASEAN Economic Community (MEA) that begins in 2016, President Jokowi asked the people to consider it as an opportunity and also a challenge.

I have said it many times that we can not become champion in our country only, the President said.

The President asked Minister of State-Owned Enterprises (BUMN) Rini Soemarno to use the ASEAN Economic Community (MEA) as a way to move the country and strengthen Indonesias capacity and industry capacity both in BUMN or private sector, strengthen the competitiveness of Micro, Small and Medium Enterprises (UMKM) and to boost the countrys export volumes.

President Jokowi also stressed the ministers to pay attention to the price of rice which mainly contributes to the high rate of inflation or about 30 percent compared to other components.

We must be careful on this matter. Thats why I call the Head of State Logistics Agency (Bulog), Minister of Trade, Minister of State-Owned Enterprises, and Minister of Agriculture everyday, because we must pay attention to this matter. The price of rice must not increase, President Jokowi said while asking related officials to take some measures to stabilize the price of food because it is a matter of poverty management.