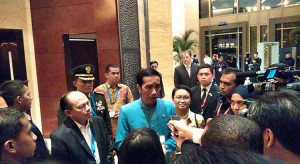 The earthquake with a magnitude of 7.9 on the Richter scale in Nepal, Saturday (25/4), which resulted in thousands of casualties, got the attention of the Government of the Republic of Indonesia.

President Joko Widodo (Jokowi) expressed the readiness of Government of the Republic of Indonesia, to assist Nepal in overcoming the problems that appears after the occurrence of the disaster.

President Jokowi is in Kuala Lumpur, Malaysia, for a working visit to attend the 26th ASEAN Summit, which will be opened on Monday (27/4) tomorrow.

Earlier, the Ministry of Foreign Affairs has expressed deep sorrow over the huge casualties caused by the earthquake in Nepal.

The earthquake with a magnitude of 7.9 Richter scale that shook the Nepal on Saturday noon (25/4) occurred during rush hour of work. As a result, many victims trapped in the rubble of collapsed buildings after the earthquake that devastated the valley of Kathmandu, which is densely populated.

The quake centered about 80 km east of the Pokhara city (the second largest city in the country) is very damaging and relatively shallow.

Ministry of Home Affairs Nepal puts the death toll reached as many as 1,805 people with about 4,700 others were injured. At least 300 people were killed in the capital Kathmandu, which the population of about one million people (Humas Setkab/ES)