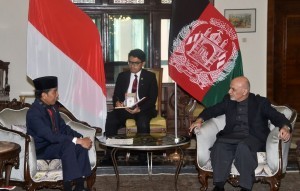 President Joko Jokowi Widodo expressed his profound condolence to the President and all people of Afghanistan for the tragedy happened in Kabul, the capital city of Afghanistan, including attacks two days ago and on Monday morning (29/1).

I pray that the victims swiftly recover and may God grants the bereaved families solace and strength, President Jokowi conveyed in a joint press statement after a bilateral meeting with Afghan President at the Agr Presidential Palace, Kabul, Afghanistan, on Monday (29/1) afternoon local time.

Indonesia, the President further said, committed to building peace and supporting the prosperity in Afghanistan. The commitment was strengthened in the bilateral meeting between the two countries convened in a warm and fraternal manner.

The President emphasized, cooperation on peacebuilding in Afghanistan is gradually in the process of concluding by both parties.

Indonesia and Afghanistan will undertake more tasks to help the process of peace-building and reconciliation in Afghanistan. the President said.

One of Indonesias supports to build peace in Afghanistan, according to the President, is the continued construction of Indonesia Islamic Centre (IIC) in Kabul. It is also planned to construct health facilities in the area this year. Health clinic in the IIC will be built in Spring 2018 accommodated As-Salam Mosque which has been used since 2015, the President explained.

The IIC was a symbol or monument of Indonesia and Afghanistan friendship. It is hoped that the Centre would become the centre of activities to promote peace.

Besides, President Jokowis visit brings blessing to the Afghan people. As he arrived, it started to snow in Kabul, which believes as brings blessing.

Your Excellencys arrival does not need to bring gold, but it brings rain and snow. Rain and snow are blessing for us. Snow and rain never choose where to fall, whether it is on wealth or poor people, President Ghani stated. (BPMI Setpres/ES) (EPI/YM/Naster)