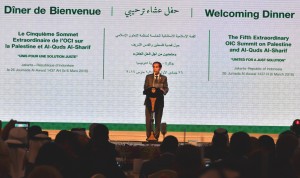 President Jokowi served the delegates of 5th Extraordinary OIC Summit a welcoming dinner which was held at the Assembly Hall, JCC, Jakarta (6/3). The delegates started to arrive at the venue at around 7 p.m. Western Indonesian Time, while raining in Jakarta.

The welcoming dinner 7.30 p.m. commenced by a performance by Zapin dance from Riau.

“This meeting reflects our full support towards the settlement of the Palestinian issue. We are here because we want to contribute to solve the problem of Palestine, we want to be part of the solution “said President Jokowi.

Furthermore, the President affirmed in the midst of conflicts in many parts of the world and stability as well as peace remains an issue, the spirit to be part of the solution must always come first. The President also stressed the spirit of peace must always be done in a peaceful and democratic way, because violence will result in more violence.

“May these two spirits suide us in our meeting tomorrow,” said President Jokowi.

Also attending the dinner among others, the 6th President of the Republic of Indonesia, Susilo Bambang Yudhoyono and the 11th Vice President Boediono, as well as Ministers of Working Cabinet. (FID/UN/MA/YM/Naster)