President Jokowi: Indonesian Ambassadors Should Explain Regarding the Execution of Drug Convicts 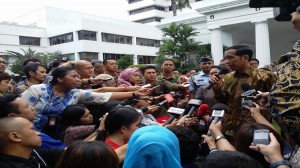 President Joko Widodo (Jokowi) reminds, the Indonesian Ambassadors in friendly countries, that they also have a duty to explain government policies to implement the execution of death sentences against foreigners who convicted of crimes involved in narcotics and drugs (Narkoba).

“The task of our ambassadors to explain why the death penalty was carried out. Because of our positive law exists,” President Jokowi told to reporters after giving a briefing on the Work Meeting of the Foreign Ministry officials with Indonesia’s Foreign Representative, at Gedung Pancasila, the Ministry of Foreign Affairso office, Jakarta, Monday (2/2).

The President asserted, that the execution of the death penalty against drugs inmates had been decided by the courts. Therefore, according to President Jokowi, the death penalty policy dissemination needs to be done, so that other countries can understand and respect the rules. “The Indonesian ambassadors abroad should be able to deliver as well, why the death penalty was carried out,” Jokowi said.

As reported earlier, President Jokowi has taken a firm stance against drugs inmates, by refusing to grant clemency to them, including the inmates who receive the death penalty. This is proven by the execution of 6 (six) drugs convicts in Nusa Kambangan, Cilacap, Central Java, and in Boyolali, Central Java, on Sunday (18/1).

Following the execution, the two countries namely Brazil and the Netherlands, whose citizens also executed, had pulled their ambassador to step called ‘consultation’.

Currently, there are still two Australian citizens awaiting execution after clemency was rejected by President Jokowi. Both convicts was Myuran Sukumaran and Andrew Chan (*/WID/ES)