President Jokowi: Indonesian Youth, We are Not Same, We Cooperate 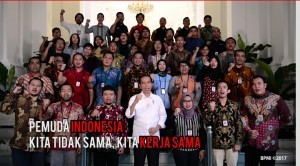 President Jokowi along with reporters at the Merdeka Palace, Jakarta, Friday (27/10).

Indonesia is a diverse, plural country, home to seven hundred-plus tribes, has thousand more local languages. The statement was enunciated by President Joko Jokowi Widodo in a video to commemorate the Youth Pledge Day, at the Merdeka Palace, Jakarta, Friday (27/10).

“We want the Youth Pledge to be the eternal spirit of the Indonesian youth, which is a force of collaboration between the youth from diverse backgrounds,” President Jokowi said.

What is interesting in this video is that President Jokowi puts on a long-sleeved white shirt and is accompanied by a group of young men and women. Apparently, they are journalists who daily cover the news at the Presidential Palace.

At the end of the video, the President and the journalists said, “Indonesian Youth, we are not same, we cooperate”.

Youth Pledge in the Present Context

Meanwhile, in its press release, the Creative Economy Agency (Bekraf) has facilitated the Indonesian youth to take initiative to share and convey their aspiration about the relevance of the value of Youth Pledge in the present context. On Wednesday, 25 October 2017, as many as 16 youths from various professions representing the creative economy sectors including the start-ups joined in the Merah Putih Work Movement including GO-JEK, Traveloka and Tokopedia, held a meeting on the latest conditions.

Their presence symbolizes the diversity of the Indonesian nation in the digital age. They come to bring the issue of diversity that occurs in the realm of their respective professions, discussing the commitment and contribution to the future of Indonesia.

From the discussion, it created the spirit of “Kita Tidak Sama, Kita Kerja Sama (We Are Not Same, We Cooperate)”, which is an operational aspiration where every youth, regardless of tribe, religion, political affiliation, or profession, must make a real contribution to the progress of Indonesia as a form of commitment to build the nation.

“We are Not Same, We Cooperate is a spirit that must be owned by youth to make real actions to build the country. Despite coming from different professions, circles and industries, they share the same vision to make Indonesia bigger. This is the relevance of Youth Pledge today by the youth,” Head of Bekraf Triawan Munaf explained.

The hashtag #sumpahpemuda2017 gives room to the youth of creative economy to show their works to President Jokowi, on the commemoration of the Youth Pledge, on Saturday, 28 October at the Bogor Presidential Palace.

Those who joined hundreds of invited guests will have a dialogue directly with the President, conveying their aspirations and commitments that have been formulated in the previous meetings. (BPMI/EN) (MUR/YM/Naster).