President Jokowi: Indonesia’s Foreign Politic is Free and Active, the Benefits Should be Perceived by the People 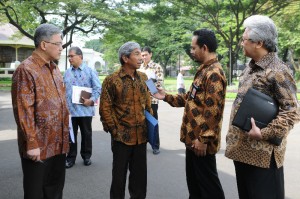 Deputy Minister of Foreign Affairs AM. Fachir after received by President Jokowi, at the State Palace, Jakarta, Friday (30/1) morning.

President Joko Widodo (Jokowi) asked all heads of representatives of Indonesia abroad to be able to translate the government’s priority issues, among others, the protection of citizens, territorial integrity, and economic diplomacy.

President Jokowi submit the request to the Deputy Minister of Foreign Affairs, AM Fachir at the State Palace, Jakarta, Friday (30/1), to report on the readiness of the Work Meeting of the Foreign Ministry with all representatives of Indonesia abroad. As planned, President Jokowi will give a briefing and open work meeting that will take place in Jakarta on February 2, 2015.

“The meeting will discuss the main issues, namely sovereignty, economic diplomacy and the protection of citizens, and good government,” Fachir said.

According to AM Fachir, Jokowi President stressed that the officials of government representatives need to improve communication and coordination with relevant parties.

He said Indonesia has 118 representatives consisting of 87 embassies, 2 Permanent Mission to the UN in New York and Geneva, as well as 30 Consulate General, and the Indonesian Consulate and 64 honorary consuls.

According to AM. Fachir, Jokowi President stressed that Indonesian foreign politics remain the free and active. However, the President said, so many friends that Indonesia has, should not be detrimental to the national interest.

Fachir affirmed, that the free and active intended by President Jokowi is friends with all countries, the maximum benefit should be perceived by people. “Not a lot of friends but harm,” Fachir said quoting President Jokowi.

The Deputy Foreign Minister also said that Indonesia should also be understand the current global economic. This meant that the direction of the global economy that followed was not mistaken. “Although in the end the national interests should come first, but we should be know the direction the wind blows,” Fachir said. (WID/Humas Setkab/ES)