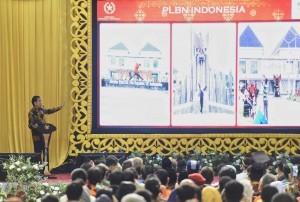 President Jokowi delivers his remarks at the opening of the 30th Congress of PMKRI, in Palembang, South Sumatra, Monday (22/1) afternoon. (Photo: Anggun/PR)

Indonesia is a very large country with a huge population of diverse ethnicities, religions, customs, and traditions. To this end, President JokoJokowi Widodo reminded the need for prudence in managing diversity and pluralism.

In order to unite this great nation, the President asserted the importance of infrastructure development. “Do not just see the physical, many people just see the physical. Why did we build an airport on Miangas Island? Why did we build runway on Rote Island. Why did we extend the runway on Rote Ndao? This is because we want to unite this very big nation with the infrastructure,” the President firmly said.

It is for this reason the President ordered the Minister of Energy and Mineral Resources to impose a one-price fuel program in Indonesia, be it in Java, Sumatra, Papua, and other regions. As a result, the President continued, people in the central mountains of Papua have enjoyed the same fuel prices as the people of Java since eight months ago.

The construction of Trans Papua and Trans Kalimantan roads, President Jokowi said, is carried out because the Government wants people in Papua, Kalimantan, and the suburbs to enjoy decent infrastructure. “Not just those in Java and in Sumatra,” the President said.

President Jokowi also gave an example of the fuel price, which previously in Papua could reach Rp60,000-Rp100,000 per liter. According to the President, this does not reflect social justice for all Indonesian people.

Furthermore, President Jokowi invited all members of PMKRI to continue to be loving students, dare to be the spearhead to unite Indonesia, dare to guard the national development, dare to be the pioneer of Indonesia, corruption-free, dare to actualize the values ??of Pancasila (the Five Principles, the Indonesian State Ideology) in real work and on a daily basis, and dare to embody their love to the Republic of Indonesia with mental fighters instead of mental losers.

“Indonesia is a very large country and we need to build together, work together, cooperate together, so that our country will soon become a developed, strong, just, and prosperous country,” the President concluded.