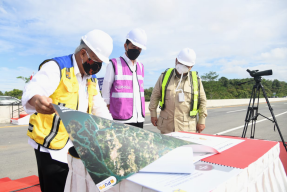 President Joko “Jokowi” Widodo on Tuesday (24/08) inspected access road to the site of the new capital city in East Kalimantan Province. The access road is located in Balikpapan-Samarinda Toll Road KM 14 that was passed by the President on his trip from Samarinda to Balikpapan.

“To build a new capital city, the most important aspect is infrastructure to the area to be able to deliver logistics,” President Jokowi said at the location.

Accompanied by Minister of Defense Prabowo Subianto and Minister of Public Works and Public Housing Basuki Hadimuljono, the President had a discussion about the location of other infrastructure development, including ports and airports. “It will be easier if you inspect the location directly. That’s all,” he added.

On the occasion, Prabowo said that the new capital city is located at a strategic location. The Government must have the courage to relocate the capital city so that the center of government will be separated from finance and business centers. In addition, the relocation has been carefully planned through many studies and considerations. Thus, he supports the decision to continue the relocation plan.

In the meantime, Governor of East Kalimantan Isran Noor expressed his gratitude to President Jokowi for the construction of the access road since it will improve people’s mobility from Balikpapan and Samarinda to the new capital.

“The regional government as well as the people are very supportive. This is state-owned land and forest area, so there is no problem with (acquisition of) land,” Isran said. (BPMI SETPRES/UN) (GWH/MMB)