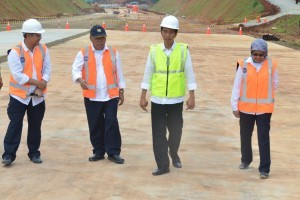 Continuing his working visit in Batang, Central Java, President Joko Jokowi Widodo inspected the construction of Batang-Semarang toll road Section I on Monday (9/1) morning. In this inspection, the President said that since 1996, when he was the Mayor of Solo, the project cannot be completed.

Nonetheless, now, based on the reports from Minister of Public Works and Public Housing Basuki Hadimuljono, the land acquisition for the toll road project has finished, while for Kendal, the land acquisition process will be finished by February. It is a good progress because the process of land acquisition is quite quick. It is supported by the Law as well as the bailout funds, the President said.

The President is optimistic that the toll road could be used on this years mudik (an annual exodus ahead of Eid al–Fitr).

Regarding the bailout funds, the President said that the total amount is Rp32 trillion and it is rapidly absorbed.