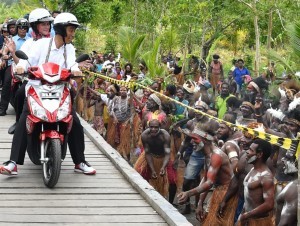 President Jokowi ride a motorcycle with First Lady Ibu Iriana during a working visit in Asmat District, Thursday (12/4). (Photo by: Bureau of Press, Media and Information).

Changing the mode of transportation is actually a common thing for President Joko Jokowi Widodo and First Lady Ibu Iriana during a working visit to a region, including to Papua Province.

On Thursday (12/4), the President and First Lady boarded the Presidential plane Indonesia-1 from Jayapura to Mimika Regency and switched to Super Puma helicopter to Asmat Regency.

Usually, at the location, several cars have been prepared to be used by the President and his entourage. However, there was something different during this working visit. The President rode a red electric motorcycle with the First Lady to reach Wiyata Mandala Hall of Asmat District Education Office which distance is 2.8 kilometers.

At the hall, besides interacting with the people, President Jokowi and Ibu Iriana also witnessed the distribution of supplementary food for children and their mothers.

They then continued their trip to visit infrastructure projects in Kayeh Village where various infrastructure projects currently under construction, including a suspension bridge. On his way to the location, President Jokowi must ride his electric motorcycle over a long bridge made of wood with no more than 3 meters width. On their way, people welcomed them with traditional dances.

After visiting this Village, the President and his entourage, using a speed boat, crossed a river to reach the construction site of 114 special housing units that have been built since 2016 at a cost of Rp19.9 billion in Amanamkai Village, Atjs District, as well as 114 housing units in Syuru Village, Agats District.

In the meantime, this year the Government plans to build another 100 units of special housing spread in the following four villages:

People are reluctant to move to the location of special housing that has been built due to the unavailability of bridges between villages separated by rivers. To overcome the problem, the Government will build four suspension bridges with a budget of Rp46 billion at following locations:

The rotted wooden road will also be repaired with a 12km long concrete road with an average width of 4 meters using precast technology.

For the suspension bridge, it passes through the settlement and will circle the city for approximately 12 kilometers. Everything is supported by concrete, since it is more durable and we want the layout in Asmat Regency to be more organized, President Jokowi said.

Before returning to Kayeh Village, the President met Jokowi, a 3-year-old boy and had a chance to carry him. Jokowi was born when I was sworned in as a President, President Jokowi said, which means it was 20 October 2014.

When the President as well as First Lady were about to return to the helipad on their electric motorcycle, it rained heavily but the President kept riding his motorcycle.