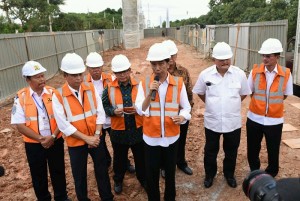 President Jokowi gives a press statement to reporters when inspecting the construction of LRT in Palembang, South Sumatera (3/3)

The President began his working visit in the province by inspecting the mock-up of the construction design of the Light Rail Transit (LRT) project through a video footage.

In his remarks, President Jokowi said that the plan to build the LRT was made in September 2015.

South Sumatera Governor told me that in Palembang, several streets suffer from traffic congestions; thus he proposed that there must be a mass transportation system connecting the airport and the city and I said I agree with his plan, the President said.

The President added that if the issue of land acquisition has been resolved by the provincial government, the construction of the LRT will be the responsibility of the Central Government.

The Governor also agreed with the scheme and in November, the Central Government issued a presidential regulation, the President added.

We hope the LRT will be used, in a short term, for the 2018 Asean Games, however, in the long run, mass transportation in all cities in Indonesia is very much needed because all major cities suffer from traffic congestion, the President said, adding that this is the vision of all.

President Jokowi also hopes that the construction of the LRT could be completed before the 2018 Asian Games.

Regarding the budget, the President said that the Central Government has allocated Rp. 7 trillion for the project.

Regarding the ongoing projects, the President said that if the provincial government and the central government continue to cooperate, the project will be completed fast.

In November, we issued the presidential regulation. In December, the construction began and now we can see projects being done from the airport to the city and to Jakabaring stadium, the President said.

Regarding the barriers faced, the President also asked the matter to the Governor of South Sulawesi.