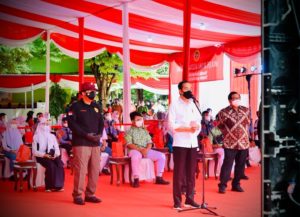 The President also met with vaccination participants in nine other provinces through video conference organized by the National Intelligence Agency (BIN).

During the video conference, the President had a dialogue with Chief of the Regional Intelligence Agency (Kabinda) of North Sumatra Brig. Gen. Asep Jauhari.

“How many people are vaccinated, Mr. Kabinda?” asked the President.

“For today, there are five thousand people, Sir. The vaccination was held in three locations, including at SMA 1 Medan and door-to-door vaccination in two sub-districts, namely Medan Helvetia Sub-district and Medan Tuntungan Sub-district,” Asep said.

In the meantime, the Kabinda of Riau Province Brig. Gen. Amino Setyo Budi reported that each region imposes its own system for the implementation of health protocols monitoring in the regions. For instance, in Riau Province, the Regional BIN has a system called ‘Jago Sodaro’.

“If someone violates the rules or if someone is exposed to the virus, his/her own neighbors or relatives will warn or remind him/her,” Amino said.

The Head of State also reminded the regional governments to use up vaccine stocks sent by the Central Government in order to immediately reach herd immunity.

“Thus, if the vaccines arrive, use them immediately. Ask for more vaccines and use all of the stocks so that herd immunity will be immediately achieved. That way, we can be protected from COVID-19,” the President said.

On that occasion, the President also listened to the expectations expressed by Elmi Gurita,the Principal of SMAN 5 Pekanbaru regarding the implementation of face-to-face learning activities in school.

One of student representatives Teuku Baihaqi from SMAN 5 Pekanbaru also expressed his hope that face-to-face learning can be conducted immediately.

Teuku revealed that as Chairman of the Student Executive Organization (OSIS), he faced obstacles in realizing his work programs since face-to-face learning have not been conducted yet.

“I hope the pandemic will end quickly so we can go back to school to have face-to-face lessons, Sir” Teuku said.

The President also shared the same hope that face-to-face learning can be conducted immediately. However, the President considered that the activity must be carried out carefully to avoid further transmission of COVID-19.

He also reminded to be aware of the transmission of the highly contagious Delta variant and to carry out learning activities properly.

“I urge the students to keep studying, keep studying through online platforms. But when you are finally able to attend face-to-face learning in the future, don’t forget to wear a mask,” he remarked. (TGH/AIT/TMJ) (RIF/MMB)