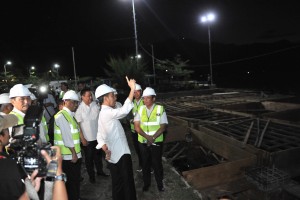 Muara Port is one of twelve ports to be built in the Danau Toba’s National Tourism Strategic Area. The construction is targeted to complete next year.

Minister of Transportation Budi Karya Sumadi said that the President has ordered him to build ports with modern architectural design that can lure tourists to visit the region.

“Ministry of Transportation will collaborate with Ministry of Public Works and Public Housing to design the ferry ports as instructed by President Jokowi,” Basuki said after accompanying President Jokowi at the construction site.

In the meantime, Minister of Public Works and Public Housing Basuki Hadimuljono explained that of the 12 ferry ports in the National Tourism Strategic Area (KSPN) of Lake Toba, four of them had been developed and will be completed in 2020, namely Simanindo Port, Ambarita Port, Muara Port, and Tigaras Port.

Meanwhile, three other ports will start construction later this year and will be completed in 2020, namely: Marbun Toruan Port, Tongging Port, and Balige Port.

Other four ports that will begin construction in 2020, namely: Silalahi Port, Sipinggan Port, Onan Runggu Port, and Porsea Port. However, there is one port that has been completed in 2019, namely: Ajibata Port.

The total investment for the construction and development of those ferry ports reaches Rp469 billion, funded by the State Budget.

The total investment support from Ministry of Transportation for the development of Lake Toba National Tourism Strategic Area until 2020 reaches Rp644.6 billion.

Meanwhile in the air transportation sector, the Ministry will extend the Sibisa Airport runway from 1200 meters to 1900 meters to accommodate the ATR-72 type aircrafts. The airport serves as the entrance point to the Lake Toba Region. (DNA/PR of Ministry of Transportation)