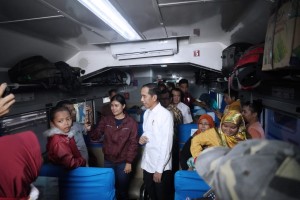 “I want to check the traffic and situation. It is apparently full of people but not as packed as I imagined,” President Jokowi told reporters.

The President also greeted the passengers who will depart to their hometown by train. He then walked through the platform and inspected one of the trains in the station.

President Jokowi expressed belief that the management of state railway operator PT Kereta Api Indonesia (KAI) has been very well-prepared in welcoming this years mudik. According to him, this year the number of travelers has increased by around four percent compared to that of last year.

“I think the number (increase) is still normal,” he said.

He also advised the travelers to remain vigilant during the trip.

“Please be careful during the trip. Enjoy your holiday with family and friends, the President concluded.