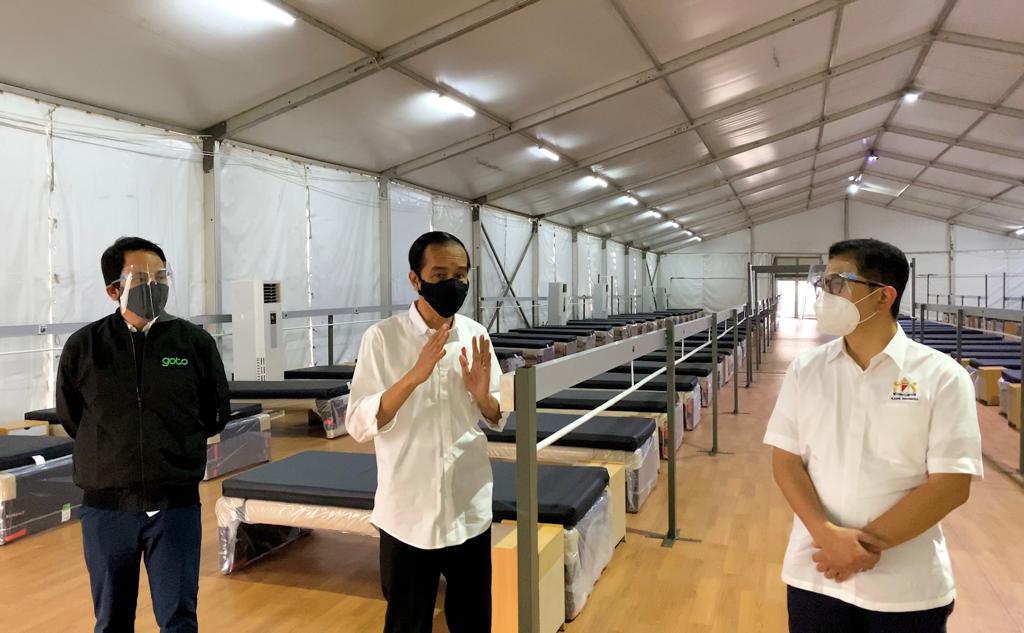 “This afternoon, I inspected (the construction of) Gotong Royong Oxygen House that has not been finished. It is due to be completed next week and perhaps will be 100 percent completed in early August and can facilitate around 500 patients,” he said.

“This is a cooperation between Kadin, GoTo, PT Aneka Gas Industri (Samator), PT Master Steel that owns the land, and other companies as well,” the Head of State said, while expressing appreciation for the oxygen house construction initiative that can ease the burden of hospitals, especially hospitals in several provinces that have a quite high bed occupancy rate (BOR).

The President also expressed hope that similar initiatives can be made not only in Jakarta but also in other regions.

“Additional capacity can reduce hospitals’ BOR. Once again, I highly appreciate it and we hope that it is not only built in Jakarta but also in other places, in other provinces. We hope it can be ready to operate and used by the people soon,” he remarked.

On that occasion, the President had a discussion with Head of Kadin Arsjad Rasjid and the CEO of GoTo Andre Soelistyo.

“(The President) asked about the concept and everything. We told him that the oxygen house is an isolation facility with access to oxygen. So, for example, COVID-19 patients that require oxygen can be admitted into this facility, get medicines, and access to oxygen,” Andre said.

For the record, Gotong Royong Oxygen House is a special semi-permanent healthcare facility equipped with oxygen supplies and treatment beds for COVID-19 patients with moderate symptoms.

The facility is constructed near an oxygen manufacturer owned by PT Aneka Gas Industri and is set to have 500 treatment beds.

Andre expressed hope that the oxygen house can help those who need access to oxygen for medical purposes and can also reduce the pressure hospitals have in terms of COVID-19 patient treatment.

“So every patient who only needs oxygen can be facilitated here and hospitals can be used to treat patients who need more medical support. I hope this way we can all cooperate—private sectors, the Government, everyone—to tackle the pandemic better,” he said.

Echoing a similar sentiment, Head of Kadin Arsjad Rasjid welcomed the first initiative to build an oxygen house, which is a cooperation of private companies, and expressed hope that similar initiatives can be made in other cities, especially those that require more healthcare facilities for COVID-19 treatment.

“I hope that this will be the first and there will be other oxygen houses. Aside from here, there will be others in East Java province, Central Java province, and many more. We hope that all businesspeople—which I will say fighters because this is a war against the pandemic—can join hands, cooperate, partner to win the war against the pandemic,” he remarked. (Bureau of Press, Media, and Information of Presidential Secretariat) (DH/EP)