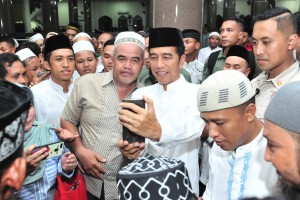 President Jokowi explained that there are many aspects to consider in the plan to move the capital, including sociological aspects, environmental aspects, socio-political aspects, water supply, disaster risk management, and peat land. “We have a team that will check, review, and calculate the construction plan. I inspect the locations to avoid any mistake on policy decisions,” he said.

According to the President, Bukit Soeharto offers several advantages since it is located between two cities, supported by an airport, and connected by toll roads. However, there are many other aspects to take into account in the capital relocation plan, including distance from coastal areas, water supply and topography, he added.

In addition to East Kalimantan and Central Kalimantan provinces, the President added that there are several other prospective locations in other provinces for the new capital that he is going to inspect next week.

President Jokowi further said that after all the preliminary process is completed, the Government will immediately decide on the new location for the new capital after consulting with the House of Representatives (DPR).

For the record, President Jokowi has decided to push ahead with his plan to move the capital from Jakarta and to build a new center of government outside Java, citing the need to ensure more equitable development and address overpopulation in Java. The relocation of Indonesias capital itself has actually been discussed since the era of President Sukarno, who had proposed Palangkaraya in Central Kalimantan as the new capital city. (RSF/JAY/ES)