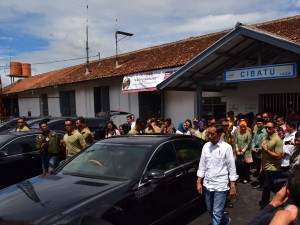 On the sidelines of his working visit in Garut, West Java province, President Joko Jokowi Widodo on Friday (18/1) inspected a number of long-abandoned railways and stations in West Java rail line system that will be reactivated.

For the record, Cibatu-Garut train line has been deactivated since 1983 and the Government plans to reactivate the line. The project is estimated to be finished by the end of this year.

The progress is currently at the land acquisition stage and compensation payment to residents whose buildings are affected (23.93%) and demolition of existing buildings (12.53%).

Other stations and railways to be reactivated are as follows: