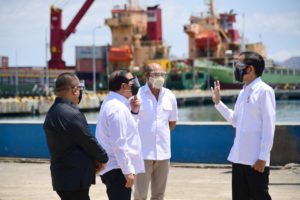 On that occasion, the President inspected spatial development of that area including the construction of roads, pedestrian walk, beach walk, and supporting drainage.

“We have seen the layout of sidewalk, and the progress of relocating a port to Wae Kelambu which is being constructed. We expect the first phase can be completed by the end of 2020 and the second phase in 2021,” he said.

Afterwards, President Jokowi and the entourage (with limited number of persons) headed to Batu Cermin to inspect the development of building facilities and area. The development which began on 16 March has 47 percent completed.

“The development is conducted to some areas based on the last year’s planning. To date, the construction, for example, in Batu Cermin area is underway,” he added.

The President and his entourage then inspected the construction of Labuan Bajo multifunction terminal in Wae Kelambu. The terminal is constructed with an aim to support stevedoring services.

In the working visit, the President is also slated to distribute working capital assistance for local small and micro enterprises.

Also accompanying President Jokowi in the series of working visit were, among others, Cabinet Secretary Pramono Anung and Governor of East Nusa Tenggara Viktor Laiskodat.  (BPMI/UN)