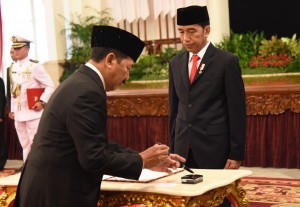 The inauguration is based on Presidential Decree Number 130/P of 2017.

Before the amendment, the BSSN was a government institution under the coordination of Coordinating Ministry for Political, Legal, and Security Affairs but is now under the authority and responsible to the President.

The BSSN is tasked to detect and prevent cybercrimes by maintaining cyber security in effective and efficient manners by using, developing, and consolidating all related elements in cyber security. Afterwards, the BSSN is also directed to the development of Indonesias cyber environment that is resilient and safe.

The BSSN is also tasked to become the states single operator and fostering institution in ensuring the Governments classified information, as well as to present the results of the analysis of encrypted information in an effort to maintain national security.