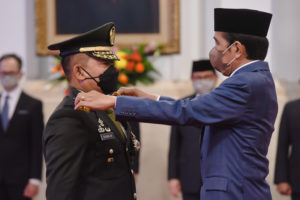 President Joko “Jokowi” Widodo Wednesday (17/11) inaugurated Commander of the Army Strategic Reserves Lieutenant General Dudung Abdurachman as the Chief of Staff of the Army at the State Palace in Jakarta.

Dudung Abdurachman was inaugurated as the Chief of Army Staff based on Presidential Decree Number 107/TNI/2021 on Dismissal and Appointment of Chief of Staff of the Army promulgated in Jakarta on 17 November 2021.

“I do solemnly swear by Allah the Almighty that I will devote myself to the Unitary State of the Republic of Indonesia that upholds state ideology Pancasila and the 1945 Constitution of the Republic of Indonesia and execute all laws and regulations in the fairest way possible for the service to the nation and the people,” the President dictated an excerpt of the oath of office.

Dudung succeeded General Andika Perkasa who was previously inaugurated by President Jokowi as Commander of the Indonesian National Defense Forces (TNI). With his inauguration as the Army Chief of Staff, Dudung’s rank increased by one level to general.