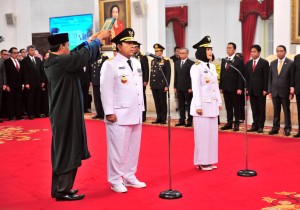 President Joko Jokowi Widodo officially inaugurated Arinal Djunaidi and Chusnunia Chalim as new Governor and Deputy Governor of Lampung for the term of 2019-2024 at the State Palace, Jakarta, Wednesday (12/6).

The inauguration started by handing over the excerpts of the Presidential Decree to Governor and Deputy Governor by President Jokowi. Then the President, Vice President Jusuf Kalla, Minister of Home Affairs Tjahjo Kumolo, followed by the pair marched to the State Palace.

Afterwards, the ceremony began by reverberating the National Anthem Indonesia Raya and was followed by the recitation of Presidential Decree Number 49/P of 2019 on the Appointment of Governor and Deputy Governor of Lampung Province for the term of 2019-2024 dated 2 May 2019. The pair then took the oath of office before signing the inauguration ceremony minutes.

For the record, Arinal-Chusnunia won the 2018 Lampung Gubernatorial Election with 1,548,506 votes or 37.7 percent, beat the other three candidates.