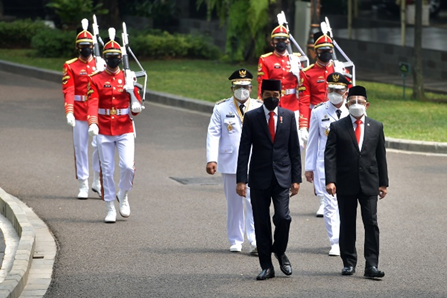 President Joko “Jokowi” Widodo on Wednesday (25/08) at the State Place inaugurated Sahbirin Noor and Muhiddin as the new Governor and Vice Governor of South Kalimantan province for the 2021-2021 period.

Before the inauguration, the pair received a duly authorized copy of the Presidential Decree at the Merdeka Palace, Jakarta. Afterwards, together with President Jokowi who was accompanied by Minister of Home Affairs Muhammad Tito Karnavian, the elected governor and vice governor proceeded to the State Palace.

Sahbirin Noor dan Muhiddin began to take office as the Governor and Vice Governor of South Kalimantan shortly after they were sworn in by President Jokowi.

“In the name of Allah, I do solemnly swear that I will execute my duties as Governor / Vice Governor in correct and just manners, uphold the 1945 Constitution of the Republic of Indonesia, implement all laws and regulations in appropriate manner, and fulfill responsibilities towards the community, the country, and the nation,” the President said the line for the pair to follow.

After the inauguration, South Kalimantan Governor Sahbirin Noor told the press he would ensure that his new administration will prioritize COVID-19 pandemic response in his province.

“We will take measures to consolidate organizations, to run the existing programs, and to create synergy between the Governments of Regencies / Cities, Provincial Government, and the Central Government, particularly in tackling COVID-19 pandemic that has been disrupting our life to this day,” Sahbirin said.