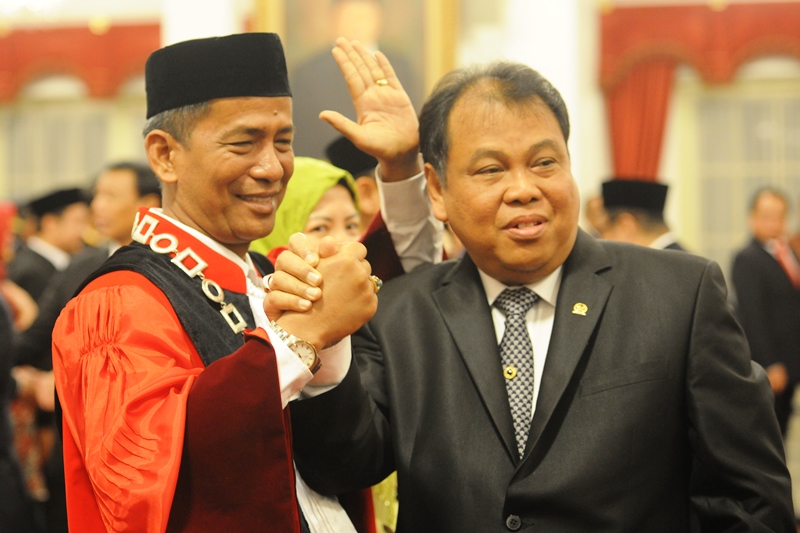 The inauguration is based on Presidential Decree Number 40/P of 2017.

In order to be more focused on performing his new task, Saldi has resigned from his position in Semen Padang and requested a leave of absence as a lecturer at Andalas University, Padang.

Starting today, I will no longer serve as President Commissioner of PT Semen Padang. I have tendered my formal resignation letter, Saldi told reporters after the inauguration. As for the position as a lecturer in Andalas University, Saldi added that his application for leave without pay would be processed.

Working as Constitutional Judge requires full concentration because 2019 will be a crucial year, Saldi said. Towards 2019, all Constitutional Judges and related components, both in the Secretariat-General and at the Registrar should have the same commitment, so that ahead of general elections in 2019, level of public confidence for the Constitutional Court can be restored, Saldi firmly said.

Even though Saldi is the youngest out of 10 judges, he believes that it will not be a problem because he is familiar with the other Constitutional Judges and he knows them well too.

I believe the other 9 Constitutional Judges will warmly welcome me and it will be a reason for me to work along with them and start new challenges at the Constitutional Court, Saldi said.

On the same day, President Jokowi also inaugurated new members of the General Election Commission (KPU) for the period of 2017-2022. The inauguration was carried out under Presidential Decree Number 43 and 44 of 2017 on the Appointment and Removal of Election Supervisory Board (Bawaslu) Members. The newly inaugurated KPU members are as follows:

While the newly-inaugurated Bawaslu members are as follows: